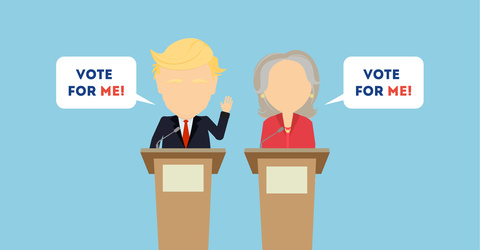 From today, Donald Trump is the 45th president of the USA. Behavioral economics can explain why he was successful even though his positions are somewhat controversial. Furthermore, his success raises critical implications for Europe’s next elections. Some of the main reasons for the success of populist politicians are explained below.

Simple instead of complicated

In a difficult and complex world, people crave for simple solutions and easily understandable decisions. The human brain has a limited capacity to process information. Processing facts and data requires efforts and concentration. That is why people often rely on gut feeling and intuition. This is faster, less exhausting and often helps making good decisions. However, this process can often lead to false conclusions. Especially, when people focus on single and obvious examples and cases, rather than on representative and objective data.

Humans are evolutionary trained to spend their attention primarily on bad news. This is an adaptive behavior in a dangerous surrounding to survive and is therefore deeply anchored in psychological processes. When it comes to news about globalization and the offshoring of firms for example, people oftentimes just recognize the bad things, for example the dislocation of jobs from their hometown to China. Meanwhile, they ignore what has been improved like a wider and less expensive range of products.

Global developments and changes like digitalization evoke fear of social decline and job losses for vulnerable groups. In these situations people tend to prioritize national interests. The so called “anti-foreign bias” describes the phenomenon that a job in the home country is valued much higher and is also seen as more important than five or ten new jobs in a foreign country. Only 17 percent of the German respondents in a survey said that a loss of one job in their home country is acceptable if this leads to 5 or 10 new jobs in another country (Fetchenhauer et al., 2010; Enste et al., 2009).

The negligence of efficiency arguments was unrelated to the level of education. The general fear and suspicion of foreigners in a time of scarce jobs make it easy to blame “the others” (Caplan, 2007). Figure 1 shows that the anti-market bias is not a matter of education. Well-trained and well-educated people like teachers and journalists have the same doubts about capitalism and free trade.

Figure 1
How do you evaluate the advancing globalization process? 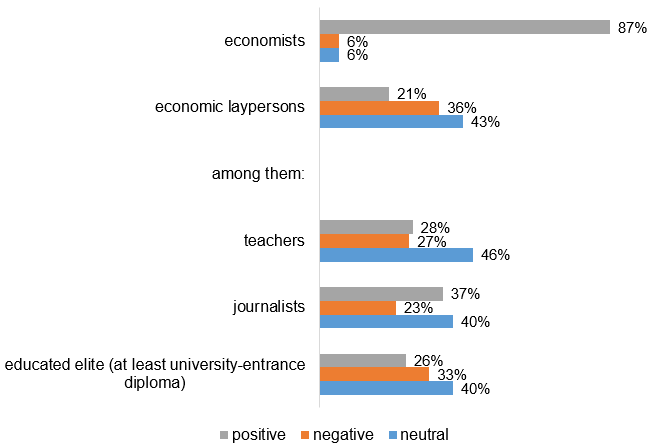 Trump is a businessperson and not an economist who should have the welfare of all countries in mind. He underestimates the economic benefits, interactions and trade with foreign countries. His economic policy focuses on the interests of his home country which he aims to achieve by protectionism and less global competition. Nevertheless, the essential theories of comparative advantages and trade developed by David Ricardo are still applicable and relevant. That does not mean that problems of certain groups (“forgotten white man”) that lost due to globalization must not be addressed and solved. Nevertheless, quick measures often have dramatic long term side effects. Non-economists often ignore such findings, e.g. reverse protectionism. The financial crisis of 2008/2009 fuelled further mistrust towards the market systems and globalization.

A main reason for the success of right-wing and anti-market groups is the economic development and the increasing inequality in some countries without a functioning social welfare system. Therefore, economists and politicians will have to better explain the pros and cons of the market system and defend the political and economic institutions that contributed to a higher global welfare and more freedom. The negative side effects of competition and liberty should thereby not be neglected.

In addition, the market economy depends on preconditions as the right to private property, an effective competitive framework and ethical values. If these preconditions do not (or no longer) exist, then irreparable structural faults will appear and cause the system to collapse.

It is time for a change – in communication, analyses and explaining economics. Business ethics and knowledge from behavioral economics can help to improve communication between and understanding of voters, people, politicians and economists.